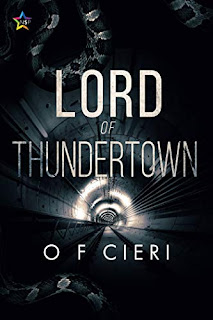 In the movies, Thundertown was depicted like a real town, with boundaries, Folk-run businesses, and a government. In real life, Thundertown was a block here or there, three businesses on the same side of the street, an unconnected sewer main, or a single abandoned building.When an epidemic of missing person cases is on the rise, the police refuse to act. Instead, Alex Delatorre goes to Thundertown for answers and finds clues leading to a new Lord trying to unite the population.

I don’t usually just copy and paste a book’s description, but I was unsure of how exactly to describe this unique urban fantasy. It’s a modern take on Fair Folk lore, where instead of say, leaving a bowl of milk to for the fae, the fae are lords of various sections of New York City and are paid tribute (more similar to the mob). A new lord is trying to claim the city beneath the city, Thundertown, and three friends find themselves involved by chance. Even this is a poor explanation, but Lord of Thundertown drops you right in the middle of a world that is as familiar as it is bizarre with little explanation, but leaves a trail of bread crumbs to follow in order to slowly discover and somewhat understand what exactly is happening. While that is 100% my shit, it will most likely frustrate the hell out of plenty of readers.

I loved the alternate NYC that Cieri painted here (though to be honest I’m a small town hick, so big cities are strange and unusual places to me anyway) and the unique way of blending in Fae folklore had me absolutely giddy. It even had me reading articles about urban renewal and gentrification as it seemed to be acentral theme to the narrative and really caught my interest. The magic system has a blend of magic, alchemy, and science and it being treated as more commonplace than mystical that I really enjoyed. It’s not explained and technical aspect aren’t gone into in any great depth—which is my preference, but your mileage may vary!

The only thing that kind of held it back for me was the characters. Not that they’re bad, in fact, I want to love them so much (especially Sam!) I just didn’t feel that I was able to get as much insight into their thoughts and emotions which I craved. The tastes I got were delightful, but made me hungry for so much more! With that said, with the world, the magic, and the action there was a lot going on that getting too deep into the characters could have made things overwhelming or bogged down the pacing, so I’m not mad about it (but I wouldn’t be mad if I got to see these character in more stories either).

Lord of Thundertown is a cool introduction to a new voice with killer concepts, and you can bet I will be keeping an eye out for more from Cieri.
book review debut lord of thundertown novel o.f. cieri review urban fantasy