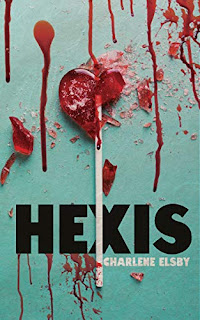 Hexis (Ancient Greek: ἕξις) is a relatively stable arrangement or disposition, for example a person's health or knowledge or character. It is an Ancient Greek word, important in the philosophy of Aristotle, and because of this it has become a traditional word of philosophy.

I. Loved. This. Book. And as is often the case, the more you enjoy something, the harder it is sometimes to actually verbalize what about it made it resonate. So the short review is: this book is way over my head in the best possible way.

“I didn’t get it” is usually a negative in book reviews, but in this instance I found it exciting. There are themes and depths here that I felt on an emotional level, but don’t know how to express intellectually (and I’m not even going to attempt it) but the use of repetition and the cyclical nature of the narrative painted an unsettling portrait of habit and trauma that’s seared into my brain.

While I found HEXIS challenging, it’s by no means inaccessible, in fact, I found it incredibly readable. I do think there’s about a 50/50 chance of loving it or becoming frustrated by it, but it is absolutely worth taking the shot on finding out where you land. Get it here, and share your analysis with me!