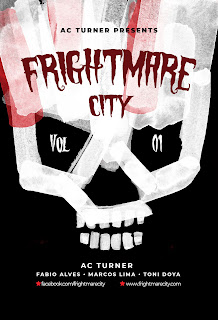 "Never ride the subway. Never leave midtown Manhattan. Stay inside after dark - no matter what!"


Recently, AC discovered "Welcome To Fear City", a long forgotten pamphlet distributed by the NYPD. In it, a Hooded Death's Head warned readers to "Stay away from New York" as authorities grappled with uncontrollable violence that left the city teetering on the brink of bankruptcy.


Reading the pamphlet, AC thought "what if"?


What if "Welcome To Fear City" was actually a thinly veiled warning against something more sinister than conventional crime. Something more evil. Something that even the Police themselves couldn't handle.


With this in mind, AC began crafting his own nightmarish version of New York. A city where crimes are perpetrated and punished each in their own horrible way.


Welcome to Frightmare City. Population... you


I don’t actually read very many comics, but when I received an email an about crime-horror comic FRIGHTMARE CITY I couldn’t pass it up. I’ve been in a pretty intense reading slump (our restaurant has officially been open a week now!) and mixing up mediums is now something I need to do more often! At this time there are four available for free online with a new comic released monthly before being published together. Each story is written by AC Turner, featuring a different artist for each installment (artists featured so far include Fabio Alves, Toni Doya, Marcos Lima, and Ulises Carpintero) and again, as someone pretty ignorant about comics I don’t know if this is the norm, but it certainly was something I particularly enjoyed. The different artists give each story a unique feel and compliment each story perfectly, while the black and white style keeps it all cohesive.


I may not read a lot of comics, but I do love me some short stories, and the stories here are perfectly bite sized shots of horror on the weird end of the spectrum. With each installment I had the feeling that it would be going in a different direction than I’d expect, I was still surprised by where they went. My favorite would have to be #2 NOK NOK, where a pair of burglars take on the wrong old lady, followed closely by #4 RED TIDE, in which a pair of kidnappers are taken hostage (and wow typing that I realize how incredibly similar they sound, but the twist on each is very different). You also get to see a break up gone bad—and then worse, and a peeping Tom’s fantasy turn into a nightmare.


These comics are great little jolts of horror and I’m hooked! If you’re in need of a getaway, take a trip to FRIGHTMARE CITY!