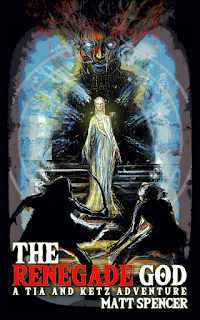 The Renegade God is now the third book I’ve read from Matt Spencer, and I think it’s safe to say I can count on him to deliver an action packed adventure that keeps me entertained and unsure of what to expect. The fight scenes are as well written as I’ve come to expect, Spencer’s personal fencing experience lends an authenticity without ever bogging down the pace. Considering my eyes almost always start skimming over during fight and battle scenes, the ability to keep me consistently engaged in them is no easy feat, and Spencer continues to impress. In fact many scenes are so bloody and brutal I can’t help but see what would happen if he tried his hand at extreme horror! The violence is tempered with humor and playfulness, particularly with the witty back and forth between twins Tia and Ketz.

So usually when you have this kind of story with a brother and sister as protagonists, the brother is tough and protective, and maybe a bit of a hardass, and the sister, who may also be a badass, yet tends to turn into a love struck dummy that needs saving right? Nope, while Ketz is hardly dead weight, the familiar trope is there, but the simple role reversal made such a difference and I really love gruff, grumpy Tia trying to make sure she and her brother survive Ketz’s romantic entanglement with their mark. Now while Tia and Ketz are wonderfully developed, supporting characters aren’t so much, but I honestly didn’t take very much issue with that since it really gave room for the protagonists big personalities.

It was a blast getting to explore another part of the Deschembine universe, and I think even readers unfamiliar with the world and characters would find this a great introduction. The Renegade God is a great read if you want a fun, action filled fantasy that doesn’t take itself too seriously (but isn’t goofy either) and I can’t wait to see what future hijinks Tia and Ketz get themselves into.