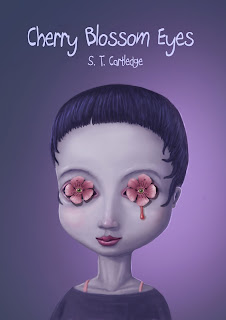 Blanko and Margo live on the Isle of Flowers, which must be protected from shapeshifting creatures known as Tourists.

I generally shy away from books geared towards the young adult audience (I'm a grouchy old lady I guess), but YA bizarro was something new to me, and I was so curious about it that I requested a review copy of Cherry Blossom Eyes despite having made the decision to not take on any more ARC's.  I'm beyond happy to report that it was completely worth adding to my overwhelming TBR, and I'm really hoping to see more YA bizarro make it's way into the world. It has the tropes I expect in YA--young love and youths vs. adults, but done in such a way that doesn't make me feel like I've been tossed back into high school.

There's a respect for it's audience that many of the YA books I've read seem to lack (again, grumpy old lady, so take my opinions on the matter with many a grain of salt). It avoids being twee, but without veering into pretentiousness. While the characters are pretty simplistic, I don't count it as a negative, and actually think it was a good call to let the atmosphere and the world building take center stage. I do feel torn between thinking it's the perfect length, but also wanting it to be just a smidge longer to give a little more exposition in some spots, but honestly, I think it's pretty much perfect and I'm just having moments of insanity. You're allowed to really soak in the strangeness and mystery of the Isle of Flowers--and the paranoia--questions are answered, but without holding you're hand and over explaining. It's been a long time since I've last read Shirley Jackson's The Lottery, but I kept finding myself thinking of it as friends and neighbors suddenly became dangerous and untrustworthy.

The real crown jewel and ultimate reason you should give this a read? Cartledge can write his ass off, and the prose is beautiful from beginning to end. Seriously, even the chapter titles are stunning, and if any one of them were to be a book title it would instantly be a book I'd want to but. It's not enough that the writing is gorgeous, it's so controlled. Sometimes you come across some really lovely prose...but it distracts from the actual story and can end up creating a disconnect--not the case here. This was a perfect introduction to YA bizarro, and it's a great way to test the bizarro waters no matter your age range.