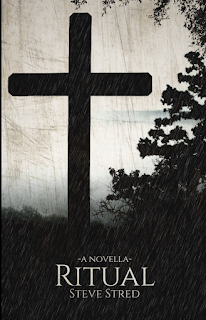 Brad is a pretty average guy. He works his 9 to 5 as a salesman, and he is an active member of his church. However, Brad's church is preparing him to be the center of a ritual that will bring forth something unholy.

I've said it before, but I'll say it again, part of what makes me excited for each new release from Stred is the amount of growth he shows. Ritual is no exception, and is easily my favorite work of his thus far (however, the devil works hard, but Stred works harder, and he has yet another book due in December!). This is also the most gruesome story of his I've read, with sexual violence, mutilation, and ritualistic murder.

Part of my love for Ritual is how the events unfolding are horrific and disturbing, but through the eyes of Brad they are viewed as just normal everyday occurrences. The way it's done really heightened the horror of it, but I can see it making hard for other readers to really feel connected, or feel like it needs something more. For me it felt more realistic considering the perspective. For Brad it's go to work, meet up with Father, and practice the ritual that will unleash a demon-- that's his world as he's known it, so it's not that shocking or unusual to him, and his acceptance is a key factor in how disturbing everything is.

I'm also partial to an ending that works for a story to be a standalone,  but also leaves it just slightly open enough that maybe this isn't truly the end. The end of Brad's story feels like it could be the beginning of the detective's, and I certainly wouldn't be upset if a True Detective type sequel/shared universe tale were to come into existence at some point.

I love me a cult horror story, and I was shocked, disgusted, and pleasantly surprised by what Stred accomplished with such a simple concept and short format. The nights are getting longer, and Ritual would be a great way to get your skin crawling for an hour one gloomy night.
horror novella occult ritual Steve stred