BOOK REVIEW: KIDS OF THE BLACK HOLE: A Punksploitation Anthology 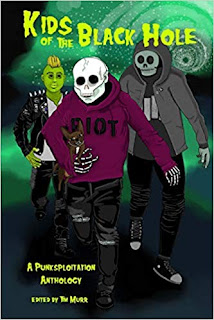 Zombie Reagans, sewer dwelling monsters with a taste for the flesh of skinheads, a poser who's something scarier, punks versus hippies and goths, and a punk singer who finds herself in the middle of an occult feud. To be honest, I'm more of a metalhead, and heavy metal and horror are an obvious and always delightful combination, however, between Zombie Punks Fuck Off and now with Kids of the Black Hole, I think it's high time for a punk takeover in horror.

The anthology opens with Black Thunder by Sarah Miner, about a punk band showing up at the wrong bar for a gig, but end up performing anyway until....a horde of zombie-like Ronald Reagan clones break out of their top secret research facility and wreck havoc. Can you think of a more perfect premise for a punk horror story? Because I surely can't.

Next up is Urchins by Chris Hallock, another punk band showing up for a gig, this time plagued by sewer dwelling monsters and skinheads. Hallock knows who the real monsters are, and it's wonderfully weird and satisfying.

I Love Living in the City by Paul Lubaczewski is bursting at the seems with misdirection. It was strangely fun watching a group of street kids plotting against a poser (who is posing as more than just a "punk") and the apathy at the discovery/twist was unexpected and lent some fun and humor.

Skate or Die by Jeremy Lowe is the story that I keep finding myself thinking about. Four outsider find themselves splitting into factions as they head into their first days of high school. Eugene is a bit of a hippie, his friend Sue is goth, and their two friends have discovered the world of punk thanks to a stranger known as Zero Boy. It taps into the individual and social changes that happen so suddenly at that age, and does so in a bizarro (and at times rather disturbing) way that I really appreciated.

The anthology closes with What We Do is Secret by Tim Murr. A punk singer finds herself involved with a strange family with ties to the occult. I had no idea what direction this story was going to go at any given moment, which is always a joy. The story feels like it is a piece of a larger world/bigger story and it's one I'd gladly spend more time in.

These are some fun stories with killer concepts, and I for one welcome our punk horror overlords!
anthology bizarro horror kids of the black hole punk punksploitation weird fiction