BOOK REVIEW: THIS BOOK IS BROUGHT TO YOU BY MY STUDENT LOANS by Megan J. Kaleita 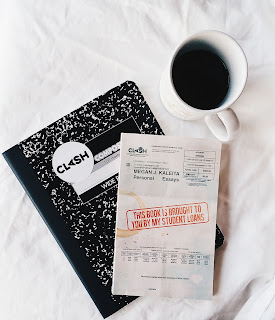 Hilarious, infuriating, and razor sharp, this collection of essays taps into what our generation is really dealing with.

The fabled (and likely entirely fabricated) whiny, lazy, entitled Millenial isn't here. Instead Kaleita chronicles a generation raised with the belief that working your ass off and getting an education will get you somewhere in life, only to find out that these days it gets you a shit load of debt, awful jobs that don't pay enough, and healthcare that is...elusive to say the least. What makes the essays standout most is the lack of self pity. By pairing absurd and often hilarious incidents (including, but not limited to, pooping your pants at work, and a diabetic wizard) with incisive commentary on sexism in the workplace, our broken healthcare system, and rural elitism, Kaleita shows she isn't asking for anyone to feel sorry for her. On the contrary, she shows she has every ounce of toughness, grit, and ability to put up with more shit than a person should (that many believe our generation lacks) which proves her points so much better than most other pieces I've read.

A little aside, I'd nearly judged this book by it's title and assumed I wasn't really it's target audience. I grew up poor white trash in Wyoming and dropped out of community college, so I lack student loan debt, and the education that comes with it. I couldn't have been more wrong!  I know plenty about awful jobs and terrible coworkers that I stuck with because I was raised to "just deal with it". I also know all about Rural Elitism, both on the recieving end, and perpetuating it, even though I had never heard the term until this collection, and it was so eye opening for me. I would've enjoyed this book regardless, but the relatability knocked it out of the park for me.

It's almost unfair just how funny these essays are, and the humor never minimizes the points made. So as awful as it is, thank you student loans for bringing me this book, and hopefully many more writings from Kaleita.