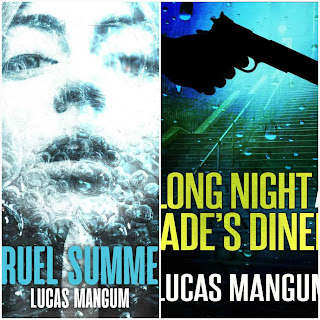 
Friday Double Features are a new experiment I'm excited to add to the blog, and I hope to make it a regular thing (although my logical side knows it's more likely to be rather sporadic). This week I'm featuring two new stories by Lucas Mangum! 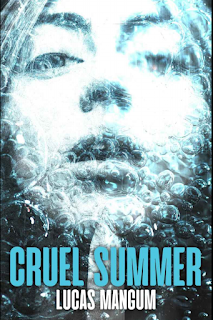 This is a fast fun read that has plenty of surprises for as short as it is, and I actually really liked the Layman inspiration and thought it was very well done (although there isn't an abundance of "rump"). It's kind of a slasher horror that isn't *really* a slasher which I thought was really fun. There's no shortage of sexual tension, nudity, and blood, but surprisingly it didn't feel gratuitous, and the characters felt very defined and unique (even the ones who were stereotypes had insights that kept them from being truly stereotypical). It did feel a bit fast at times and I kind of wanted it to slow down at a couple moments to ramp up the tension, but I can't really complain too much about a fast paced thriller either! I always love when stories take something familiar and subverts my expectations and this did this more than once, and the ending in particular was SO satisfying. This would be a perfect read for the beach or sitting poolside! 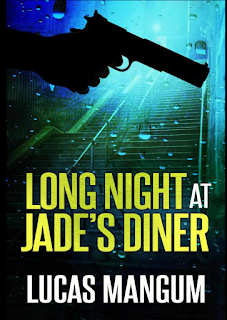 I had first read this story on Patreon, and reading it again immediately after the tragedies in El Paso and Daytona (and Jesus Christ those aren't even the only recent ones) may have been poor timing on my part, but fortunately Mangum handles the events here with considerable tact. The shooter is a lurking threat, but hardly the focus. Instead the spotlight is kept on the employees and patrons of Jade's Diner, both their interactions with each other, and glimpses into their lives outside of the restaurant. Prioritizing their humanity (even at it's most mundane) made it more disturbing to me than most tales that try to look inside the mind of the killer, and kept it from feeling exploitive. Knowing how well Mangum can do stomach churning extreme horror (which is really, really well) the choice to keep the gore and violence relatively subdued here in comparison was welcome given the subject matter, and shows so much understanding and versatility.

I was introduced to Mangum's work with Saint Sadist in all it's transgressive horror, and the more I read, the more impressed I am by the variety of style and tone he works in. I feel these short stories would make a great introduction, and a way to choose if you want to dive into deeper and darker waters (oh and if you'd rather go for something a bit more romantic, he has an alter ego you might like to meet).
double feature lucas mangum short stories thriller