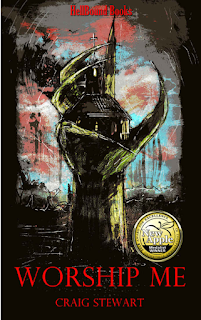 A woman and her son are abandoned by her husband, until one day at their small rural church, he reappears. He returns a changed man--and not for the better. He has been sent by The Behemoth to convert the congregation, and who must prove their loyalty by choosing one of their children for sacrifice, or they will all be destroyed.

There was something about WORSHIP ME that gave me some strong 70s/80s horror paperback vibes, and to be honest, that alone made it worth the read for me. There's a demonic presence, neighbors turning on each other, and some very gruesome deaths that kept me uncertain of what to expect until the very end. I found myself very attached to Angela and I couldn't help but imagine myself in her scenario as she tries to protect her son from being sacrificed to The Beast (and no spoilers, but I probably would have done more or less the same in her situation, but without much of the guilt).

I really appreciated how Stewart makes it clear that no one is safe, and any character could be next. However, aside from Angela and Clara there was a certain emotional impact I felt to be missing, and often felt myself feeling a bit disconnected. To be fair, it's fairly likely that I'm the problem, and not the book--so don't let that dissuade you. I also would've liked to see more from the perspective of the children considering they're the ones in the most danger (and another certain little something that I won't spoil here).

Overall, WORSHIP ME felt like a great throwback (without really being a throwback) that takes you through the more or less expected story arc before taking it a few steps further into something totally unexpected. I have a feeling Stewart is an author with some interesting tricks up his sleeve, and I look forward to more of his work.
Craig stewart demonic hellbound books horror Worship me