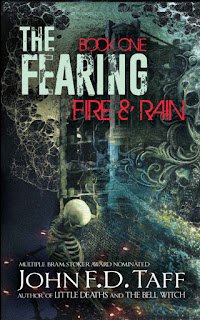 The first installment of The Fearing, Fire and Rain introduces us to a cast of characters finding themselves in the beginning of the end and facing their fears--all of them.

I don't think I've ever read a serialized novel (before it being collected into a single edition) and to be honest, I do feel a bit odd reviewing just the beginning of a novel on it's own. Fortunately, it's one hell of an introduction that sets the stage wonderfully, and has me fully onboard and excited for what's to come.

The premise is absolutely rife with possibilities. What will terrify me might elicit nothing more than a 'meh' from you, so the idea of personalized fear manifesting is a scary one (not mention smart). The two separate groups of a characters (a trio of teens in the Missouri and a small group of adults in the Southwest desert) promise a variety of different fears to come, and give us some tense and creepy events to kick things off (a wise man once said, "Snakes, why did it have to be snakes?!). Even this early in the game I think it's safe to say it will be anything but boring.

The one thing that got me a bit, and this is definitely just me being nitpicky considering this is only the beginning of the story, is the ol' smart uncool girl versus pretty popular bitchy girl, with the hot popular guy to fuel to the flames. Seeing young girls pitted against each other, especially with a boy involved, just makes me cringe so hard anymore. The good news here is that there were a couple lines that suggest the possibility that Taff may have an interesting take on the trope, and it's too early for me to pull out a soapbox (and more than anything I'm excited to see what's in store!).

Fire and Rain is an exciting beginning to a story that I cannot wait to read the rest of, and as much as I so badly want to binge it all RIGHT NOW, choosing to the serialize it is a fun and smart choice. So buckle up and brace yourself for all the fear!