BOOK REVIEW: THE TRUTH ABOUT THE MOON AND THE STARTED by Brian Jacobson 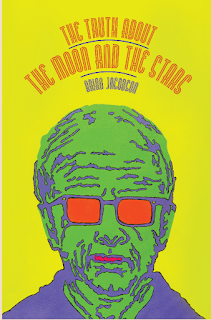 After losing both parents in a car accident, Shane drops out of high school and passes his days prank calling strangers. One day he accidentally calls an elderly man named George Thurman that kicks off an obsession, and leads to exceeding strangeness.

This is going to be a bit of a contradictory review, and I'm still not entirely sure what to think of how I felt about this one even though I enjoyed it. So let's dive in!

I had a hard time getting into the story in the beginning, mostly due to the narrator being such a little shithead. It was entirely intentional, and I like an unlikeable protagonist, but sometimes you're just not really in the mood for it, and I ended up taking a two day reading break. The pacing felt a bit odd to me as well, so much time was spent with Shane and his equally crappy friends, and somewhat ok girlfriend pulling rude, dumb pranks before things actually started happening. Then things start getting a bit weirder, including a couple sharp turns into bizarro land, leading to an ending that didn't really resolve much for me.

So all that sounds like this is a dud for me, right? Well, that's where I'm just as baffled, so let's back it back up again. After my two day break I returned to the book and Shane clicked for me. This takes place in 1999, and while I was only 9 at the time, I remember. The humor was rude, crude, and offensive with all of it's casual racism and ableism, and it's not supposed to still be funny now, but somehow Shane and his dumb pranks took me back to the era better than any mention of beanie babies or MTV. While I noticed and acknowledged the odd pacing, it didn't actually bother me, because somehow Jacobson's writing got me hooked, and I was so immersed in the story even when it was slow. The sudden trips into bizarroland were actually high points for me, the astral projection scene in particular was fantastic, but I don't know that they'll work for a lot of readers. The ending wasn't the most satisfying for answering my questions, BUT it's also actually pretty perfect for the tone of the story and even got a chuckle out of me.

In the end, in spite of anything else, I was absolutely charmed by this book. I don't fully understand it, but it happened. I think that really speaks to the author's ability to write his ass off, and I'm excited to read his future works!
absurdist bizarro Brian Jacobson humor the truth about the moon and the stars