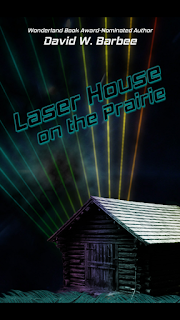 Jeph just wants to enjoy his retirement with his husband in their shack on the prairie, but before his retirement he was known as Sexy Jeph, the most notorious outlaw in the laser filled wild west. A band of outlaws show up to his home and force him out of retirement for one last score. Together they must steal the world's most powerful weapon from a secret city filled with the most dangerous creatures of all....nerds.

As soon as I saw the title for this, before I'd even read the briefest of descriptions, I knew I desperately needed to read this book. I instantly had visions of pure fun, weirdness, and humor--and it delivered on all counts--and then some. I've heard plenty of praise for Barbee's world building, and while I can't compare due to this being my first read from him (you better believe I'll be fixing that), I'm definitely in agreement. The marriage of classic frontier imagery and laser soaked futurism couldn't be more satisfying, and the secret city Obscuria is fully realized (and as fascinating as it is insufferable). He's no slouch when it comes to characters either. Jeph is a delightful protagonist who desperately wants to leave his dark past behind him, and genuinely just wants to be a good person. While the "man haunted by his dark past" character is a familiar one, the common tropes attached to it have been dodged, and replaced with more nuance. The supporting characters are quirky and distinct, with one in particular having an amazing arc that was impressive given the short length of the story (not to mention how much was already going on).

Toxic fandom is taken to it's  absolute height with no obsession or subculture left unscathed, but done with a wit and cleverness that somehow never feels condescending It feels like the jokes about the Internet "being like the Wild West" was made literal, and it doesn't have any right to be imagined as so well, but it is! It was a blast from beginning to end, I couldn't put it down, and at the risk of going against the themes of the story....I really need a neon soaked, synth filled, animated movie adaptation.
bizarro David w. Barbee Excession Press Laser house on the prairie weird western