BOOK REVIEW: DOORWAYS TO THE DEADEYE by Eric J. Guignard 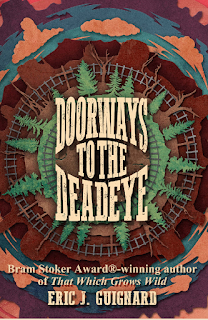 Crossbuck Luke is a hobo legend known for riding the rails and telling tall tails about the magical world of Athanasia--the land of collective memory where legends live on.

There are some concepts that will never get old to me, and stories about the power of stories are at the top of that list, with DOORWAYS TO THE DEADEYE being an especially creative take. It hits on so many notests that really gave me in thrill, particularly how a great story grants a kind of immortality, but also subtly touches on how propaganda and fakes news (so to speak) can take on a life of their own. As if that's not enough we have a parallel world featuring icons from history, and starring Depression Era hobos so there was no way I couldn't love this!

Luke Thacker is the star of the show here, and he is essentially the hero/savior archetype. He is the chosen one/special, only he can save the world, very standard "good guy" etc, and while that may sound a bit basic and bland, it felt anything but. The fact that he is a hobo certainly helps set him apart, but more than anything he fits the theme of the story so perfectly (and archetypes exist for good reason). The handling of historical figures was a real highlight for me considering how easy it could have been to just get lazy with them, or turn them into cartoons. Instead Guignard takes the legends and gives them just the right amount of nuance and depth while staying familiar, and the villain was completely unexpected (and pretty fabulous I must say). I do wish there was just a bit more time spent on Luke's companions in the Real World, while they were distinct and realized, I didn't get attached enough to get the emotional impact certain scenes should've had. However, I like to play devil's advocate with myself, and that lack of attachment actually felt thematically appropriate so I'm not actually mad about it.

The world itself was impeccable, it gave me historical fiction realness, but with magic and wonder. Using the Hobo Code as sigils was such a brilliant concept, and the alternating time lines were handled with such restraint, and managed to avoid feeling like one story was constantly interrupting the other. In DOORWAYS TO THE DEADEYE, every piece of the puzzle is fully realized and thoroughly thought out, and I can't help but think that fans of THE TALISMAN by Stephen King and Peter Straub would fall in love with it. Guignard has been on my radar for a bit now, I just wish I had taken the plunge sooner!