BOOK REVIEW: A HAWK IN THE WOODS by Carrie Laben 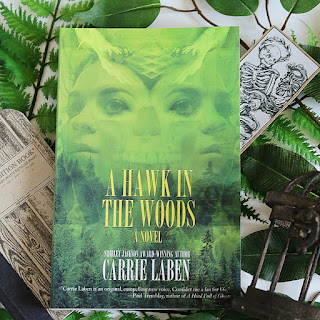 Abby Waite just got diagnosed with cancer, so she does the only logical thing, and breaks her twin sister Martha out of prison and they embark on a road trip to the old family summer cabin. Oh, and their family, the Waite's have a knack for mind control, posession, and a tendency to just not stay dead...

A Hawk in the Woods is told from Abby's perspective, and is probably now my favorite use of alternating timelines. Laben avoids copious amounts of exposition, and instead gradually gives glimpses of the big picture as the story progresses. Every question I found myself asking was answered at some point (in such an organic way no less). Each revelation felt perfectly timed, my curiosity was maintained, but never stretched to the point of confusion or frustration.

What really impresses me here were Abby and Martha. It often feels like asking for complex female characters is asking for too much, and often we just get the clumsy girl, or the alcoholic woman, but Laben actually created two very different, complicated, and flawed woman. Abby is easily unlikeable, manipulative, and a full blown narcissist--but she is far from boring. Martha is her opposite, meek and submissive, and while she is sympathetic, I found myself frequently getting exasperated by her (which was absolutely intentional, and so well done!). Even when I wanted to slap one--or both--sisters I never stopped feeling fully invested in their story. This isn't the tale of sisterly love you may be expecting, but something much more surprising.

Between creating excellent characters and just great storytelling I'm shocked that the release of this debut novel was the first I'd heard of Carrie Laben. If this is her just getting started she is one to watch out for, and I have a feeling whatever comes next will be exciting!
A Hawk In the woods carrie laben horror occult weird fiction witches word horde