BOOK REVIEW: GIRL LIKE A BOMB by Autumn Christian 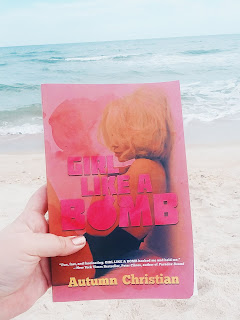 Beverly Sykes is attracted to bad boys and troubled girls. She begins to notice her past sexual partners seem to be undergoing drastic changes--overcoming their internal struggles and working on becoming the best versions of themselves. After a brutal encounter with a teacher results in him committing suicide, Beverly leaves town to cultivate her power with the hopes of changing the world.

To say Autumn Christian has a way with words feels lazy, but since I can't think of a better turn of phrase (I'm a hack) I'm going to plagiarize the wonderful Zé Burns--she is the undisputed queen of the unexpected metaphor. The imagery and moods are one of a kind and effortless without getting distracting, and for a storyline driven by sex it never felt pornographic (but don't worry, the sex scenes are plentiful). The greatest success for me though was the creation of Beverly Sykes, who is now one of my top 5 favorite protagonists of all time. In fact, I was so impressed by Beverly that this is probably less of a book review, and more of ramble about what a great character she is, so sorry about that (not sorry at all).

Maybe I need to read more widely, but I'm struggling to think of another character like Beverly Sykes. I've seen the badass chick with a chip on her shoulder that can fight anyone, and I've seen the cold but brilliant woman that can outsmart anyone--there are plenty of stoic protagonists that accomplish their goals via violence or manipulation to go around. So seeing a protagonist who's power is sex (but who isn't a femme fatale) use it not to destroy, but to improve and enlighten, was incredible to say the least. That's not say Girl Like a Bomb is without a body count, but change is sought over destruction (but sometimes destruction is inevitable). While Beverly's story follows the typical superhero arc in many ways, it subverts expectations left and right.

This was my first read from Christian, and certainly won't be my last. If you want an actually fresh take on superheroes, this is it.
autumn christian Clash books Girl like a bomb speculative fiction