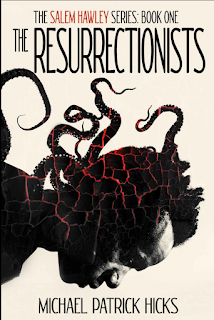 Having won his emancipation after fighting on the side of the colonies during the American Revolution, Salem Hawley is a free man. Only a handful of years after the end of British rule, Hawley finds himself drawn into a new war unlike anything he has ever seen.

The Resurrectionists is the first in what will be a series following Salem Hawley going up against grave robbers, occultist doctors, and cosmic horrors, and it certainly did a fantastic job of getting me hooked and ready for the upcoming books! Once again Hicks brought me almost too far into his story, I could nearly smell the blood and feel the tentacles reaching for me from the void. There's a fine balance between being so descriptive you feel like you're within the story, and being so descriptive it takes you out of the story, but Hicks has found that perfect balance and walks it with aplomb.

I do wish I had gotten a bit more insight into Salem himself and what makes him tick. What I do know is that he is a moral, loyal, and badass character, and that's enough for me to know I'll gladly read about him fighting baddies and monsters for as many books as Hicks writes about him. This is also a novella length story with a lot happening at a very fast pace, and I'm sure as the series continues there will be more character development--so I'm not mad about it (but actually pretty psyched!) I mean, a black protagonist in post Revolutionary War America battling human and inhuman monsters? What's not to love??

We do get a pretty good picture of the antagonists here, and while that might seem a bit backwards I felt it really drove home just how much Salem is up against. If Lovecraftian monsters aren't enough, there are absolutely vile humans as well--racist, human sacrificing, grave robbing humans, and you will loathe them entirely. On the subject of race, I really appreciated that race issues of the time (and who are we kidding, they haven't gone anywhere) are so centered within the story, but treated with sensitivity. The N-word does make appearances, but is used sparingly and pretty much exclusively by the villains, which may seem small to some (but certainly felt big to me).

The Resurrectionists is a great story on it's own, but also serves as a stellar introduction to a series that makes this "series shy" reader excited for what's to come.