BOOK REVIEW: THE NIGHT AND THE LAND by Matt Spencer 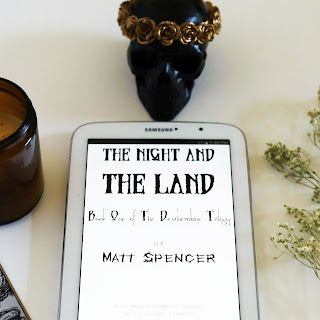 Sally Wildfire is a runaway, Rob Coscan is a nomadic troublemaker. When they meet in Brattleboro, Vermont the sparks fly immediately, but this isn't a simple story of boy meets girl. Sally and Rob are members of two feuding races not of this world.

The Night and The Land is the first book of the Deschembine trilogy by Matt Spencer, and it's an urban fantasy that features many familiar tropes of the genre, but in a refreshing way. There's a bit of Romeo and Juliet style instalove, there's a chosen one archetype, and many a troubled past, but Spencer has some tricks up his sleeve and doesn't let things get too predictable.

There isn't a ton of exposition here, which I personally loved. You slowly learn bits and pieces about the Spirelights, Crimbones, and their history with each other, but to be fair, I have read Spencer's Changing of The Guards which exists in the same universe. I definitely think this gave me a bit of an edge here, and I could see the lack of a more detailed explanation of the backstory of the world being a bit frustrating for some readers (but I do feel all the immediately relevant information is there).

The love story between Sally and Rob is so integral to the story but....unfortunately I am just not really a romance kinda gal, so I wasn't too keen on that. However, this was very much about my own personal preferences and not at all about a lack in quality, and readers who enjoy romance (or are even just unbothered) will surely enjoy it. For my fellow romance unenthusiasts, the romance and the relationship are the driving force for events, but there is still plenty of action and twists (and blood, so much blood!) to keep things plenty engaging for the rest of us.

The Night and The Land definitely feels like the first in a trilogy, there are elements that aren't fully explored or explained so it doesn't quite stand on it's own, but it was one wild ride, and I am fully onboard and ready to read the rest of Sally and Rob's journey!
fantasy Matt Spencer The night and the land urban fantasy