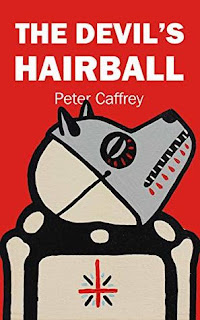 Victor Holycross has committed an act of sacrilege. Because of this, his wife and daughter have been cursed and transformed into living hairballs. Now he must pay his penance by collecting a set of holy relics with the help (and hindrance) of a one legged whore, an attack nun, and a talking dog with a belly full of stones.

The writing style reminded me a lot of the kinds of stories of epic quests and adventures I liked to read as kid which I really enjoyed personally (and how weird and dark were a lot of books aimed at younger audiences back in the day?) and when things started taking more and more disturbing turns, the more the style seemed to heighten just how fucked things become. At times I wasn't sure if I should be laughing or horrified, which may not work for some, but for me it felt very effective. The hypocrisy of organized religion is ruthlessly ripped to shreds, but I felt Caffrey  kept his critique focused firmly on Christianity and those who hold power within the church rather than those who follow the faith. While I am not (and never have been) religious, I definitely appreciate that Caffrey knew who his true targets were and kept his sights on them all the while.

Oh boy. That ending. It will likely piss people off. It pissed ME off, but after taking a moment to stop and consider it, and the overall message of the book, it was really the only proper ending (as much as I wish it weren't). The Devil's Hairball is probably the most scathing send up of Christianity I've read in the past few years, and while it doesn't shy away from the perversity and cruelty it still let's you have a damn fun time before it crushes your soul.