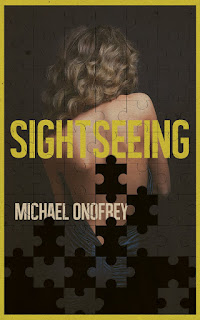 Although I preordered this before seeing the review request, I want to thank Michael Onofrey for sending this my way for an early look!

In Sightseeing by Michael Onofrey, a man visiting Paris meets a mysterious woman after a visit to an art museum. They agree not to speak about anything from before their paths crossed within the museum, and spend the next 24 hours exploring the city and each other.

Both the prose and the plot are minimalistic, but this is a vibrant and engaging story where life imitates art. Told from the perspective of Wayne, he is the character we know the least. Instead his thoughts and observations are almost entirely focused on a strange woman we know only as Diane. As far as we know Diane is a woman from North America, but I couldn't help but picture her as Anna Karina in Vivre Sa Vie, but with a hint of Béatrice Dalle in Betty Blue. She is almost a more mysterious (and at times, slightly sinister) take on the manic pixie dream girl. She both adapts herself to various locations and situations, and adjusts the surroundings to suit her desires as she leads Wayne around Paris. Diane is the true star of the story and she is as fascinating as she is unknowable.

While I can't claim to have fully understood everything, and I doubt I caught on to all the meaning and themes within, I found it a beautiful and enticing read. I'm particularly glad I had preordered a physical copy of this for future readings full of new understandings and interpretations.