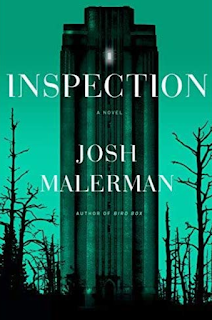 In the middle of the forest there are two towers. One houses the Alphabet Boys and D.A.D, and the other is home to the Letter Girls and M.O.M. Both have been raised with zero knowledge that the opposite gender exists in an effort to raise geniuses who lack the distraction of sex.

I can't rightly call this a book review, this is just going to be an rambling rant about how much this book irritated the life out of me. It's going to be filled with all the spoilers, so if you have not read Inspection, but are planning to you should bail on me now. If you read Inspection and enjoyed it you should also bounce (no judgement whatsoever! But it's no fun reading about someone dumping on something you enjoyed!) I'm admittedly a very easy to please reader, and I think I'm pretty great at suspending my disbelief, but this is a book I finished out of pure spite. I'll start with the biggest issue, the one that put my in hyper critical mode in the first place, and brought to light a series of smaller issues that I'd likely be able to easily overlook if I had been actually enjoying the book.

Everything in Inspection revolves around gender and sexuality. D.A.D and M.O.M are running an experiment to create geniuses. They believe that males and females are distracting each other, and dull each others potential. The children in each tower are now 12 years old and on the cusp of puberty, and yet, somehow heterosexuality is the only possibility AT ALL. Even the mere chance that a child could be anything other than straight and cisgender is never even considered. To be completely honest, if Malerman had just tossed in a cop out line like "we must keep an eye out for any boys/girls becoming distracted by each other" I probably would have been mollified to a certain extent. I don't demand or expect representation in all my reads (but it's pretty fucking nice when I do see good rep) but since the entire plot is dependent on gender and sexuality it feels like an oversight at best, if not blatant disregard. Did no one at any point ask "But what if one of the kids is gay?" and if someone did ask, why would you choose to simply ignore it?

Now if you're thinking "but they're only 12!" Or "in such a small group why couldn't they all be cis/hetero?" Well, I knew in kindergarten that I liked both boys and girls, and I had a class size of a whopping 12 students. I didn't know what 'bisexual' was, and I distinctly remember asking my mom what a lesbian was after bigger kids called me one. If you still think I'm asking too much, how about the fact that a boy and a girl, who just find out another gender exists, find out their life has been a lie, and presumably have never seen physical displays of affection beyond hugs, start kissing and caressing each other? That's so much more reasonable and believable right?? (To be fair, while frustrating as all hell, that scene is very innocent and not sexualized, so that's something). The concept of this book is tailor made for exploring LGBTQ+ themes, yet they aren't even acknowledged.

And now we get to the more minute, and slightly petty issues I had.

1. Why didn't they build fences?
2. They have security, but security doesn't make rounds of the properties??
3. Trying to create geniuses, but not teaching them Latin?
4. Why mention a bio father making it to the grounds if he is just a corpse in the next scene? Was I supposed to feel something? Annoyance was all I felt.
5. How do they teach the children history while maintaining ignorance of the opposite gender?
6. They don't teach the children biology though? So no brilliant doctors in the making, just genius.....engineers?
7. Seriously... all those security guards doing exactly jack shit...why even
8. The author in the boys tower in 50 shades of insufferable, honestly, I can't
9. These kids are incredibly isolated and kept in ignorance of the world, how the hell do they suddenly become killing machines? If you can keep knowledge of other genders away from them, why can't you keep them away from the concept of violence, especially if you want to keep them under control?
10. I kept getting told how smart everyone was....yet they were pretty stupid and boring?

I hate disliking books, and I really dislike outright hating books. I like to find the good, and I want to enjoy myself. I'm one of the few people that hasn't read Bird Box (yet) but I did read Unbury Carol and enjoyed it. I know Malerman can write, and even in Inspection the writing itself is good enough, but what he was writing was just so, so bad. I want to believe that it's not his fault, that with the release and subsequent success of the Bird Box adaptation on Netflix he was rushed to publish something around all the buzz, but Inspection felt lazy. I'm happy to see Malerman becoming so successful, but this was a failure for me.

(ps. how wild and wonderful would it have been if J and D of the Alphabet Boys found themselves becoming "distracted" by each other? And if upon discovering the boys tower K realized the reason she feels so different from the other Letter Girls is because she isn't a girl, but a boy?)
Inspection Josh Malerman rant suspense