BOOK REVIEW: Changing of the Guards by Matt Spencer 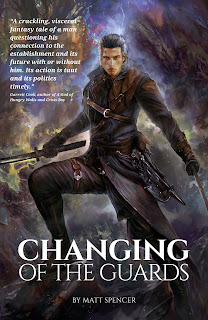 Many thanks to Matt Spencer for sending me a copy in exchange for an honest review!

Captain Severen Gris of the Spirelight International Police set out into the Scnlogmire mountain ranges, to put down one more local upstart bandit gang. That was before he learned a terrible secret, of corruption within the Spirelight Empire itself, threatening the entire countryside. Now an outlaw among his own people, Severen must strike an uneasy alliance against the very Theocracy
he’s sworn to serve, with his sworn enemy, the bandit chief Rorkaster.

As much as I enjoy fantasy novels, I don't read all that many, so I'm not as familiar with the common tropes like I am with the horror genre. So with that in mind, I found Changing of the Guards by Matt Spencer to be a very unique take on a somewhat familiar premise. The world was intriguing, and the magic system was an imaginative blend of science and earth magic. In particular, the examination and criticism of colonization and manifest destiny is what caught my attention and kept in engaged to the end.

The enemy turned friendship between Severen and Rorkaster is the real heart of the story. They're and odd couple, yet it works. Most of the time their banter was hilarious and flowed well, but there were a couple times it did feel like a bit much (just a couple of eyerolls at times). I'm firmly #teamRorkaster and a part of me wishes he was the center of the story. Another HUGE point in the stories favor for me was the handling of a female character, who in most other stories would be the star of an obligatory romantic subplot-but not here, and THANK YOU! Shrira got a way better deal in this story than I expected, but I do wish she were a bit more prominent in the story (for a small amount of "page time" she still shines though).

Now for a couple odd things that got me a bit. Some of the word choices seemed a bit peculiar, this isn't in a fantasy version of medieval times, so I didn't expect it to try and mimic that syntax, but things like "cool", "awesome", and "man" threw me off a bit (fortunately it was pretty minor and didn't take me out the story much). The other thing that got me was early on in the story there were a couple lines that rubbed me the wrong way, and had me really concerned I had a mire of misogyny and homophobia ahead of me. While I definitely had my hackles up, I personally found that to be a one off situation. Woman are warriors, scientists, police officers, and priest kings, and its treated as the most natural, normal, obvious thing (as it should!!). One of the main characters is also a bisexual man in an open relationship, and it's not treated as an odd or "gross" thing, nor is it treated like a joke! So in the end I took no offense.

I will say the ending had a deus ex machina of sorts that was...bizarre....to say the least. I think it may make other readers think "wtf was the point of it all them?!?!" Maybe because I'm a "it's the journey not the destination" type, but I just went with it and it didn't bother me (but seriously though, it's something).

Overall, there were a few things that distracted me, but the story as a whole was action packed and engaging. Changing of the Guards is a wild ride, but it was one I enjoyed.