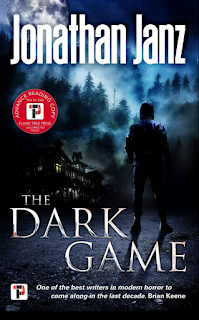 I got to read this thanks to NetGalley!

A group of authors are attending a competitive writing retreat hosted by the very successful, and very reclusive, Roderick Wells. Through manipulation and cruelty, Wells will push the writers to write a truly amazing story, but only one writer can win, and the losers lose more than just the competition.

The Dark Game opens with introductions to a rather large cast of characters, and it feels like a few too many to properly keep track of. The good news is that Janz starts picking them off in no time, so you don't actually have to keep track of all of them for long! Even the cannon fodder characters have traits to distinguish them, not to mention secrets and dark pasts aplenty. What I found really interesting was how well Janz balanced predictability with the unexpected. Characters you expect to hook up or form alliances do, but the order of the contestants "leaving" the retreat was full of surprises. My personal favorite was Will (which seems strange considering I don't feel like we actually get to know him very well) but in my opinion the most compelling character is Sherilyn, and I would love to read a story just about her.

I've said it before, but I have to say it again-Janz writes a finale like nobodies business. I can't stop being impressed by how he is able to draw it out so much, without losing the tension and boring the reader. Instead I found myself on the edge of my seat completely unsure of what would happen next, and even when I thought the danger was over and the happy ending was achieved, a clever surprise awaited me.

If you're looking for those old school horror vibes in a contemporary release, Janz is your guy!