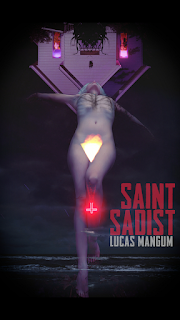 After suffering years of abuse from her father-and pregnant with his child-Courtney leaves home to try and find a better life for her child. With no options she goes into prostitution until an accident finds her at The Homestead, home of Brother Ambrose and his Earth cult.

To be honest, if hadn't have randomly popped onto Twitter shortly after starting this, I think I would have been incredibly disappointed by the time I reached the end of the book. Good timing and good luck had me happen upon the author hosting a Q&A where he responded to a question about some of the inspiration behind the book: 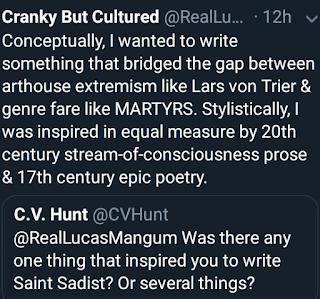 Seeing this so early in the story allowed me to adjust my approach because I expect very different things from an arthouse movie than I do a more traditional movie.  I do think other readers will pick up on this with no problem, I'm just fairly certain I personally wouldn't have "got it" on my own so having this nudge in the right direction helped tremendously.

The story is told completely from Courtney's point of view, with very little insight into the other characters or information about her surroundings. This makes the supporting players feel two dimensional, and the locations don't feel complete or grounded. I also would've liked to have lingered at The Homestead longer, and learned more about Brother Ambrose and the Earth cult. BUT! This story isn't really about the other characters, or their locations. This is very much about the inside of the protagonist's mind (a protagonist that explicitly states that she does not know if she is sane or not) and is centered solely on her perceptions and experiences. So, are the events in the story reality? Or the delusions of a deeply traumatized woman who has experienced "visions" since she was a child? Maybe we are watching Courtney cope with her trauma via fantasy, or maybe this is a reverse Rosemary's Baby of sorts. For me it wasn't important whether or not the events were real, but that they were real for Courtney. I'm still reveling in the imagery and symbolism days later, and there are so many elements my mind keeps returning to for further examination.

Knowing the author's motivations made this a daring and ambitious book, thematically, conceptually, and stylistically. I feel he succeeded for the most part, and found myself impressed by the end. To be fair, much like the films that served as inspiration this one will be polarizing no matter what, and  if the disturbing subject matter doesn't turn you away the style might. Considering  what a quick read it is I think it's definitely worth seeing which side of the fence you land on.