BOOK REVIEW: This is a Horror Book by Charles Austin Muir 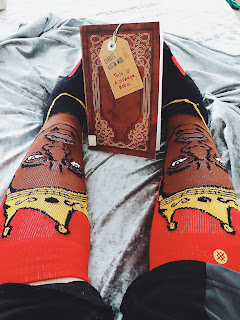 Fantasies about Charlize Theron, a book full of spells that bring famous horror monsters to life, a library full of demons what are really into kinky Skype sessions, your favorite slashers wrecking havoc together, and that's not even the half of it. This Is A Horror Book by Charles Austin Muir is a hilarious, meta, bizarre, gross, eerie and surreal collection of stories that hits so many different notes that at least one is going strike a chord with you. Lucky for me almost all worked for me, but three in particular are my favorites, and are most likely going to stick in my head forever.

The Haddonfield Hit Squad pretty much says FUCK YOUR FOURTH WALL!! The narrator is dreaming that he is Michael Myers cruising his hometown with a couple other well loved characters on a murder spree....until the narrator's witchy, dream hijacking wife (with a deep appreciation for uh, man love) steps in.

Notes On A Cosmic Horrorcore Album is absolutely wonderful, eerie, unsettling, and understated-it might give you a bit of whiplash with it's drastic change in tone and style from the previous stories, but I felt the high contrast made the story feel even more powerful.

And my favorite story of the bunch is without a doubt The Raekwonomicon. SourceRZAs both good and evil battling it out, fungus bombs, and SO MANY TOP NOTCH WU TANG CLAN REFERENCES!!! I don't know that I've ever geeked out over a short story so hard. Even if you aren't a fan of Wu Tang this is still a killer story, but it is probably more confusing.

Overall this collection probably really isn't for everyone, but I do feel like there is at least one story for anyone. I personally thought it was ridiculously fun, and I have images and stories that I don't think I'll ever forget.