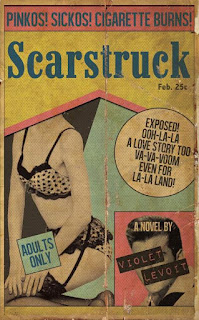 I immediately became a fan of Violet LeVoit after reading her book I MISS THE WORLD. She somehow made a story that is almost entirely a conversation between two characters in a single setting feel more kinetic and engaging than it had any right to be, and ended up being one of my top reads of 2018. When I saw her offering eArcs of her upcoming book I jumped at the chance, and I immediately started to panic because I DO NOT LIKE ROMANCE. I DO NOT LIKE EROTICA.


I've always associated romance with the cheesy covers, and assumed they were Mary Sue led wish fulfillment daydreams on paper. As for erotica I assumed much the same, but with lots of super cringey sex scenes thrown in for even more uncomfortable reading. The kicker? I've never actually read a romance OR erotica novel! Straight up for over a DECADE I've been looking down on romance and erotica novels while having never read either. What the actual fuck? Where the hell did these prejudices even come from? From the fact that sneering at Romance is a cool thing to do? From crappy forced romantic subplots in bland thrillers? Probably both, with a side of outrage at the popularity of a certain erotic Twilight fanfiction.


Scarstruck by Violet LeVoit follows a Hollywood hunk, a starlet with communist sympathies, and a Mexican bell boy in an unexpected love triangle in 1960's Hollywood. LeVoit is an expert at subverting expectations, and here she examines sexuality, gender, power, and love within in the mob like machine of Hollywood's golden age. The dialogue is every bit as clever and razor sharp as I expect from LeVoit (I don't know that she could write a stilted awkward conversation if she tried). The characters weren't shallow stereotypes, but unique, fleshed out, and incredibly human. Our main man Ron Dash gave me some strong Rock Hudson vibes, and Lana is easily one of my new top female characters with her communist sympathies, adventurous ways, and the perfect balance of toughness and vulnerability. The romance isn't cliché and saccharine, but real, complex, and more than a little dirty. Levoit fully embraces the complicated nature of love, sex, and sexuality in a way that even this killjoy found incredibly romantic and sweet....even with the cigarette burns. I didn't even skim the sex scenes as I tend to do, not out of prudishness, but most sex scenes in books are more awkwardly funny than sexy.  Here the sex scenes offer further depth and insight to the character’s thoughts and motivations, as well as their relationships with each other, and you know what? They were damn sexy too. This is stellar example of how genre fiction can be the perfect vehicle for examining aspects of ourselves and our society while being wildly entertaining, just leave your preconceived notions at the door, k?