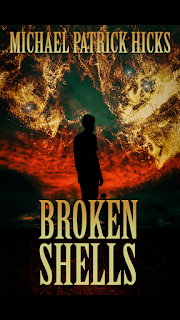 Broken Shells is a tense and scary survival story with a strong commentary on classism and racism (that doesn't beat you over the head). Antoine DeWitt is broke, just lost his job, and the stress of being a husband and father is getting to be too much for him. Then he receives a flyer in the mail from a local car dealership claiming he has won $5000. Skeptical but desperate he heads to the dealership to suss it out, and things quickly turn into a subterranean fight for survival with and ending that shocked me to the core.

The highlight of this novella was the perfect pacing, it was fast and intense with so much action packed into a just over 100 pages there's hardly a moment to catch your breath or feel safe. DeWitt also undergoes a wonderful character arc, he is imperfect and has moments where I wasn't sure id i wanted to root for him, but he developes into a full blown hero. DeWitt's internal monologue does get really repetitive, but it felt believable under the circumstances, more like his mantra to keep him focused on surviving. Then there is dealership owner Jon Dangle. He is awful and does awful things, yet Hicks does a fantastic job of creating an antagonist who does things for a reason, and  the reason is even honorable to an extent, but his methods are absolutely abhorrent. And the monsters, dear god the monsters are completely unnatural and utterly terrifying,  Hicks almost described them TOO well making my skin crawl and itch almost constantly!

The ending literally stunned me. It filled me with anger and grief and I honestly hated it, BUT I believe those feelings were elicited intentionally. As much as I didn't like it, it was absolutely the right ending for this story. Hicks doesn't pull punches, and I'll definitely be reading more of his work.