BOOK REVIEW: Creatures of Want and Ruin by Molly Tanzer 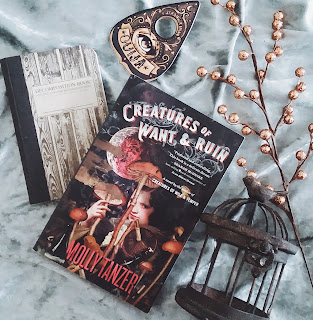 Creatures of Want and Ruin by Molly Tanzer is a prohibition era tale of a bootlegger trying to pay for her brother to go to college, a high society lady in an unhappy marriage, and a diabolical cult operating under the guise of temperance in the midst of what could be the end of the world.

Beware, for there be spoilers here. Although this was an entertaining read, there were a couple things that did irritate me that involve major plot points that I just need to get out of my system. So fair warning of you choose to continue.

This story starts with a couple of intense scenes, and then keeps a rather slow pace afterwards for a good chunk of the beginning. However, this time was taken to introduce us to and develope some really compelling characters, so I don't personally count this as a negative. Ellie is both a fisherwoman and a bootlegger trying to care for her family, is engaged but also seeing the reclusive poet living across the bay (it's an open relationship, and one that is handled well). Fin is new to the island, along with her husband and friends/hangers on who seem to desire nothing more than a Gatsby style life of excess, leaving Fin feeling  disconnected and alone. We don't get as much time with SJ, but she is the character  I'd most want to read a novel about; implied lesbian, expert chemist, but due to being an African American woman she is a moonshiner rather than a chemist (but the best damn moonshiner).

These woman (and a few fellas)  band together when a batch of tainted moonshine linked to a new church on the island gives drinkers visions of the apocalypse.  The cult and the ease in which they convert the locals is utterly terrifying considering it so closely mirrors very real events and mindsets plaguing the world today. A lot of talk of "preserving our ways" and "protecting ourselves from outsiders" that was both horrifying and impressive in it's realness.

Now for the slightly ranty bit. I will preface that at least it was refreshing (I guess?) for the disposable, just-there-to-service-the-plot characters were male for once, but we definitely miss out on a lot of emotional impact because of it. I'll start with the lesser of the two annoyances. Again, spoiler city coming up.

Rocky, the poet across the bay, Ellie's side piece (who her fiance approves of) ends up being a pretty much completely pointless character. His only purpose  outside of showing that Ellie has a somewhat open relationship, is telling the heroines that yeah, the demons are real, he grew up in a diabolist cult, no he isn't going to help them. That's it, really. Granted I have a theory based on where Fin ends up that Rocky also made a deal with a demon at some point, but in this story that added nothing to the plot for me, and if he were deleted it wouldn't have had an effect on the plot, like, AT ALL beyond just confirming the plot.

Now, what bothered me the most was Lester. Lester is Ellie's little brother, and honestly the catalyst of the whole story. Lester had polio as a child, and has grown into a fragile man, but one with a sharp mind that has been accepted to medical school. The risks Ellie takes are constantly justified by needing money for Lester to go to school, how important it is, how almost a everything  boils down to getting her little brother out, and giving him a future. We don't actually know much about Lester beyond frail, kind, and intelligent, but we do know Ellie and her care for her brother makes us care for him....until his death feels like a total nonevent to her. I can understand shock, numbness, the distraction of  trying to stop the end of days, but it was really treated with as much importance as the death of a dog earlier (which is to say, very little) and it actually ended up making me dislike Ellie somewhat.

As much as the handling of those characters bothered me (quite a bit) overall I enjoyed  that book and found it to be a fun read with great female characters, and  disturbing villains in   an interesting setting. Tanzer is an author with style that I'll be reading more from, this one just happened to have a couple things my brain couldn't get over easily.