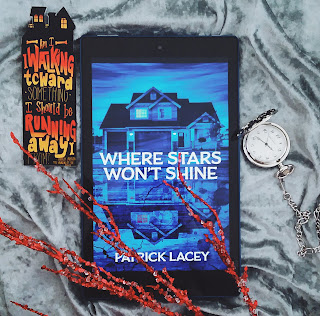 A few years after infamous serial killer Tucker Ashton murdered her boyfriend and escaped prison, Ivy Longwood begins seeing visions of blood and is being called to Tucker's hometown of Marlowe, Massachusetts. Ivy isn't the only one being called, and Marlowe isn't what it used to be.

Where Stars Won't Shine by Patrick Lacey is like a checklist of things I love in a horror story. Serial killer? Check. Creepy little town? Check. Ghosts, creatures in the woods, and protagonists you actually want to see survive? Check, check, and check! Not only is this a perfectly creepy read, but the pacing was so perfect, things are creepy from thr get go and the dread and unease never stop growing, there's no lagging, no sudden rush to wrap things up, just that perfect sweet spot where you can't stop turning pages until you reach the end.

Want a solid, classic horror story that you can't put down? You can't go wrong with this one folks.
grindhouse press horror Patrick lacey Where Stars won't shine