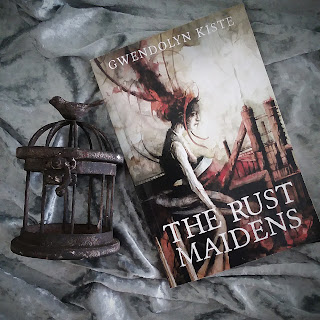 In Cleveland, Ohio 1980 the girls on Denton Street are going through changes. They are graduating from high school, their fathers may be facing unemployment, and some have bones turning into metal and fingernails turning into glass. The Rust Maidens by Gwendolyn Kiste was a phenomenal piece of body horror made especially unique for me by being told from the perspective of one of the girls NOT undergoing the transformation coupled with the fact that the horror doesn't come from the strange and unusual, but from the familiar.

The story is told from the perspective of Phoebe, alternating between the present day and 1980 when a group of girls on her street begin to change. Phoebe is a rebel, an oddball, a troublemaker. She is fascinated by insects, and has a treehouse built specifically as an insect sanctuary and her best friend is her cousin who lives down the street. She is also the one piece of the story that kind of bothered me, mostly due to the fact that for a troublemaking, rebellious, oddball, she isn't that odd, and her troublemaking is mild (like about as spicy as milk). Even her secret thermos of alcohol is eyeroll inducing considering the drinking age in 1980 was eighteen and Phoebe is.....eighteen.... but her love for her cousin and her protectiveness towards the Rust Maidens more than makes up for it. We don't really get to know any of the other characters very well individually, but Kiste does a wonderful job of putting herd mentality on display while tearing it apart.

What really keeps my mind wandering to this story are all the layers of meaning and symbolism throughout, the need for and fear of change, butterflies and cocoons, girls becoming woman, the desire for freedom and the inability to escape, with a feminist thread weaving it all together. The Rust Maidens is a prime example of what makes horror so enduring and meaningful.