BOOK REVIEW: At the End of the Day I Burst Into Flames by Nicholas Day 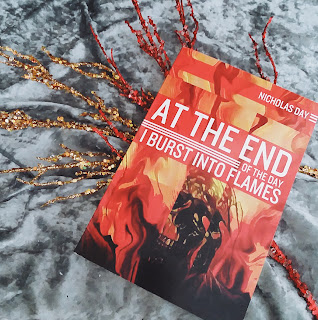 At The End Of The Day I Burst Into Flames by Nicholas Day is one powerful novella about a man nicknamed Firecracker whose father spontaneously burst into flames when he was a child, and today is the today he will do the same.

You know how characters in books often say their "life flashed before their eyes"? This is is what flashes before Firecracker's eyes. It is so deeply personal it feels like an invasion of privacy. The thoughts, memories, and feelings you'd likely bury in your mind rather than share with another person are on display here, and it is most deeply uncomfortable, and incredibly moving.

The plot is minimal to almost nonexistent, and feels rather disjointed,  however this is one case where it feels intentional and was incredibly effective. It felt like a genuine peak into the psyche of a man preparing to embrace death, and it is both unsettling and beautiful.

This is a story about loss, death, fire, and more than anything, Love.
At The End Of The Day I Burst Into Flames bizarro Bizarro Pulp Press horror Journalstone Nicholas Day